Empire star Taraji P. Henson apologizes to LAPD for accusing them of racially profiling her son... 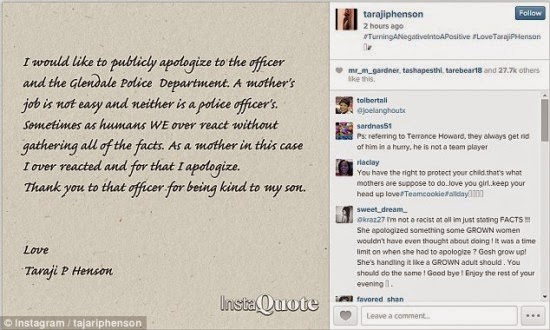 Many police hate cameras and react badly when they realize they are being videotaped. Cops who are trying to do a good job have should nothing to fear. In this case, the video cleared the cop and prompted an apology. This cop actually gave Taraji P. Henson's son a break. She should fund raise for good local charity that helps families of fallen officers.


Empire star  has issued a groveling apology to the LAPD admitting her son was not racially profiled.
The actress unleashed a scathing attack on officers earlier this week, accusing them of pulling over her 20-year-old son Marcel ‘for no reason’ to ‘illegally search his car’ in Glendale, California, in October.
But after the force released dash-cam footage showing the car streak through a red light, Henson has backtracked.
The video, released on Friday, shows Henson admit to having marijuana and Ritalin on him, before an officer also finds hash oil, a grinder and a knife.
After a short and calm conversation, the officer lets Henson drive off without a ticket.
Keep on reading…