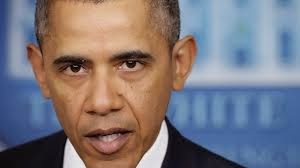 Hypocrisy, thy name is Barack Obama.


“When you have a law like this one in Indiana that seems to legitimize discrimination, it’s important for everybody to stand up and speak out,” said Mr. Earnest on ABC’s “This Week with George Stephanopoulos.”
Just before Mr. Earnest made his comments, however, Indiana Gov. Mike Pence defended the law in an interview on the same show, noting that the federal government and 19 other states previously passed a Religious Freedom Reformation Act, including Illinois.
After President Bill Clinton signed the federal Religious Freedom Reformation Act (RFRA) in 1993, “some 19 states followed that, and after last year’s Hobby Lobby case, Indiana properly brought the same version that then-state Sen. Barack Obama voted for in Illinois,” Mr. Pence said.
Indiana Senate Republicans made the same point in a Thursday press release: “The bipartisan respect for religious freedom has also carried over to the votes for most state-level RFRAs. For example, when President Obama was an Illinois State Senator in 1998, he voted for Illinois’ RFRA.”
Mr. Obama served as an Illinois state senator from 1997 to 2004. The Illinois RFRA took effect in July 1998.