Liberal Heartache: The Goracle isn't interested in running in 2016 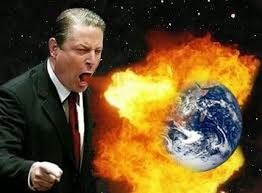 If you had made 100's of millions of dollars pimping climate alarm-ism, you wouldn't want to run either.


Carter Eskew, who ran the advertising and messaging team for Gore’s 2000 campaign and remains in contact with the politician-turned-climate change advocate, flatly shut down the notion. “[H]e is neither doing nor thinking anything about running,” Eskew said in an email.
“I have no indication this is real,” said longtime Democratic strategist Bob Shrum, who was a top strategist on Gore’s 2000 campaign. “I think it’s a media creation.”
Indeed, Gore himself has given no indication he’s interested in a return to politics. He’s become a wealthy businessman, author, and advocate and has avoided weighing in on politics outside the handful of issues he deeply cares about, including climate change. And running against the wife of his former ticket-mate would tip of a Democratic family battle royale that the party seems uninterested in having.