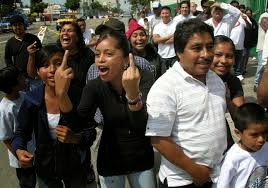 You get more of what you enable...

The next explosion of illegal teen border crossing is in full swing, but just one-in-six are being sent home, with most of the rest settled in the United States, according to new government figures.
The U.S. Border Patrol agency reported that they have seized 12,509 illegals under age 18 since October, making it the second biggest surge in history after last year's unprecedented movement of unaccompanied youths across the nation's southern border.
However, when compared to the numbers of illegal kids turned over to U.S. Immigration and Customs Enforcement, it is clear that most are being "booked in" to U.S. facilities and then released — not sent home.