Father of Benghazi Victim: Hillary is a liar... 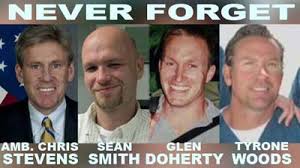 Most of the mainstream media is avoiding the families of the victims like the plague.


The father of Tyrone S. Woods, a CIA contractor killed during the Benghazi attack, on Friday accused former Secretary of State Hillary Clinton of lying to him and the American people about the circumstances that led to his son’s death.
Charles Woods said new evidence presented at a House hearing Thursday showing Mrs. Clinton knew within hours that the attack on Sept. 11, 2012 was a planned and carried out by al-Qaida linked terrorists proved she lied to the victims’ families when she falsely blamed the incident on a spontaneous protest over a U.S.-made anti-Islam video a few days later.
In an interview with The Washington Times radio show, The Capitol Hill Show with Tim Constantine, Mr. Woods recalled how Mrs. Clinton greeted and consoled him at Andrew Air Force base as the body of his son was returned from Libya.
“I gave Hillary a hug and shook her hand. And she said ‘we are going to have the filmmaker arrested who is responsible for the death of your son,’” Mr. Woods said.
“Based on her demeanor and body language I knew she wasn’t telling me the truth,” he added.
Keep on reading…