Hillary on Benghazi Committee: "If I were president...I would have done everything to shut it down.” 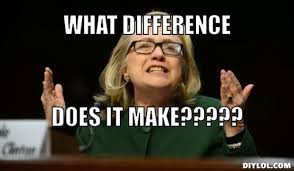 No doubt. After all, what difference does it make our Ambassador and three other Americans were killed. That's nothing compared to electing a Democrat in 2016.


Her campaign has called the House Select Committee on Benghazi a “taxpayer-funded sham,” a “Republican hit-job,” and an investigation designed to drive down poll numbers and play “electoral politics with a terrorist attack.”
On Monday, at a televised town hall here in New Hampshire, Hillary Clinton said as much and then some: She argued that the committee was set up “for the sole purpose of going after me”; she accused Republicans of exploiting the deaths of the four Americans killed in the Benghazi attacks; and she said that, were she serving as president, she would’ve tried to dismantle such a committee.
“This committee was set up as they have admitted for the purpose of making a partisan, political issue out of the deaths of four Americans,” Clinton said in a live town hall with about 70 voters, hosted by NBC News. “I would’ve never done that. And if I were president, and there were Republicans or Democrats who were thinking about that, I would have done everything to shut it down.”
Keep on reading…