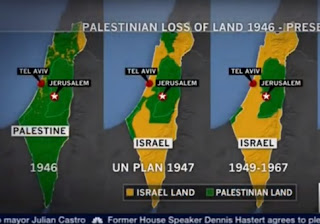 There never was a Palestine. Actually, most of the land depicted as Palestine was mostly inhabited by anyone.


MSNBC has admitted that highly controversial graphics aired on the network that depicted Israel as stealing land from the Palestinians were factually wrong and that the broadcast would be corrected on Monday, according to a network spokesperson.
The cable news network has been fighting off criticism after it aired the graphics and analysis, including a map linked to conspiracy groups branded as anti-Semitic, that portrayed Israel as existing on territory expropriated from Palestine.
The graphics garnered criticism from pro-Israel advocates and has now prompted the network to acknowledge that the graphics were highly misleading.
Keep on reading…