ISIS terrorists have blown up the Arch of Triumph in Palmyra 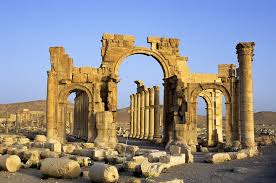 DAMASCUS (Reuters) - Islamic State militants have blown up the Arch of Triumph, a major monument in the 2,000-year-old Roman city of Palmyra, Syria's antiquities chief said on Sunday, after they destroyed two ancient temples at the central Syrian site in recent months.
Maamoun Abdulkarim told Reuters that sources in Palmyra had confirmed that the Arch of Triumph, a jewel in the exquisite collection of ruins in the oasis city, had been blown up.