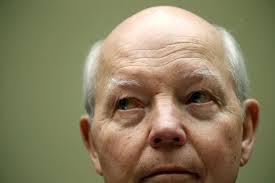 WASHINGTON—Today, House Oversight and Government Reform Committee Chairman Jason Chaffetz (R-UT) and 18 members of the Committee introduced a resolution to begin proceedings in the U.S. House of Representatives to impeach Internal Revenue Service (IRS) Commissioner John Koskinen.
In introducing the resolution, Chairman Chaffetz said, “Commissioner Koskinen violated the public trust. He failed to comply with a congressionally issued subpoena, documents were destroyed on his watch, and the public was consistently misled. Impeachment is the appropriate tool to restore public confidence in the IRS and to protect the institutional interests of Congress. This action will demonstrate to the American people that the IRS is under repair, and signal that Executive Branch officials who violate the public trust will be held accountable.”
Specifically, Commissioner Koskinen violated the public trust in the following ways: