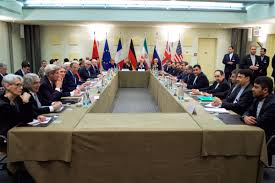 Violates the law? When did that ever matter to Barack Obama?


Some senior U.S. officials involved in the implementation of the Iran nuclear deal have privately concluded that a key sanctions relief provision – a concession to Iran that will open the doors to tens of billions of dollars in U.S.-backed commerce with the Islamic regime – conflicts with existing federal statutes and cannot be implemented without violating those laws, Fox News has learned.
At issue is a passage tucked away in ancillary paperwork attached to the Joint Comprehensive Plan of Action, or JCPOA, as the Iran nuclear deal is formally known. Specifically, Section 5.1.2 of Annex II provides that in exchange for Iranian compliance with the terms of the deal, the U.S. “shall…license non-U.S. entities that are owned or controlled by a U.S. person to engage in activities with Iran that are consistent with this JCPOA.”
Keep on reading…