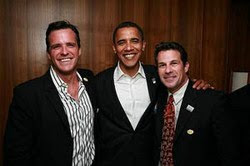 President Obama's safe schools czar, Kevin Jennings, failed to report a case of child molestation several years ago. He even encouraged the affair between a 15 year old boy and an older man. Where does he get this twisted worldview from? His inspiration was NAMBLA (North American Man Boy Love Association) supporter Harry Hay.

For anyone who spends even an hour on the internet looking into Jennings’ speeches and writings, his nonchalant attitude about an older homosexual man having sex with a boy should not be a surprise. What is surprising is that no one is mentioning reports that Jennings publicly stated that he was inspired by one of the biggest promoters of pedophilia in the country—Harry Hay. Hay actively promoted sex between men and boys and supported the North American Man Boy Love Association (NAMBLA). Transcripts of a GLSEN conference in NYC on October 25, 1997 indicate that Jennings said, “one of the people that always inspired me is Harry Hay.” Jennings also edited a book called Becoming Visible: A Reader in Gay and Lesbian History for High School and College Students which included a biographical sketch on Harry Hay. One of GLSEN’s Education Department resources also lists a work on Harry Hay.