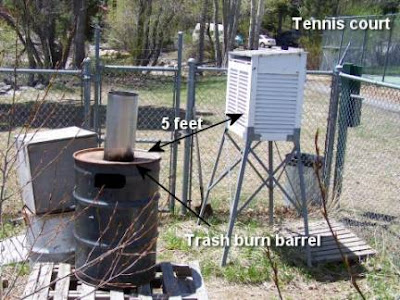 UK's Met office is pushing a surface temperature data do-over. This proposed do-over is in response to the many problems with the data sets and methods used to calculate global temperature.

After the firestorm of criticism called Climate-gate, the British government's official Meteorological Office has decided to give its modern climate data a do-over.

At a meeting on Monday of about 150 climate scientists in the quiet Turkish seaside resort of Antalya, representatives of the weather office (known in Britain as the Met Office) quietly proposed that the world's climate scientists start all over again on a "grand challenge" to produce a new, common trove of global temperature data that is open to public scrutiny and "rigorous" peer review.

In other words, conduct investigations into modern global warming in a way that may help to end the mammoth controversy over world temperature data that has been stirred up in the past few years.

Among the changes they are proposing(pdf) are:

• "verifiable datasets starting from a common databank of unrestricted data"
• "methods that are fully documented in the peer reviewed literature and open to scrutiny;"
• "a set of independent assessments of surface temperature produced by independent groups using independent methods,"
• "comprehensive audit trails to deliver confidence in the results;"
• "robust assessment of uncertainties associated with observational error, temporal and geographical in homogeneities."

Wouldn't 'real' scientists have already done these things already? It sounds like an admission their records and methods are not: well documented, peer reviewed, independent, well audited or robust. Hmm... And the world is supposed to commit trillions of dollars to prevent man-made global warming based on this and similar data?
Posted by Bluegrass Pundit at 6:45:00 PM