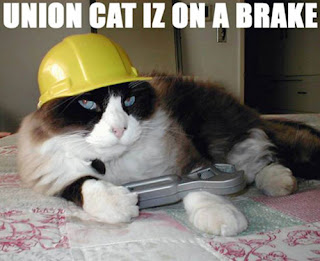 An good example of how this works is the Weatherization program. Top of the Ticket reported:

Obama's federal government can weatherize your home for only $57,362 each.

That is the cost of the program so far based on the number of homes weatherized. Why is this? This program has been subjected to the The Federal Davis-Bacon Act for construction jobs. The purpose of this Act is to force the government to pay exorbitant union scale wages on jobs. This is the only way most union shops can compete for federal jobs because of their bloated wage and benefit packages. Determining this overpriced wage for every area of the country has taken one year.

According to the GAO report, the Department of Labor spent most of last year trying to determine the prevailing wage is for weatherization work, a determination that had to be made for each of the more than 3,000 counties in the United States. [E.A.]

In the middle of the worst recession since the Great Depression, President Obama's government has delayed creating stimulus jobs for a year to insure taxpayers pay too much.
Posted by Bluegrass Pundit at 7:34:00 PM