VARGAS: Let's talk a bit about the coming elections in November. You had recently-- and the Tea Party movement, do you think it will be a force to be reckoned with? You had said last summer that it was a faux grassroots movement. You called it the Astroturf movement.

PELOSI: In some respects it is. Uh-huh.

VARGAS: Is the Tea Party movement a force?

VARGAS: So, common ground with many people in the Tea Party movement.

PELOSI: Well, no, there are some. There are some because they, again, some of it is orchestrated from the Republican headquarters. Some of it is hijacking the good intentions of lots of people who share some of our concerns that we have about the role of special interests and many Tea Partiers, not that I speak for them, share the view, whether it's -- and Democrats, Republicans and Independents share the view that the recent Supreme Court decision, which greatly empowers the special interests, is something that they oppose. 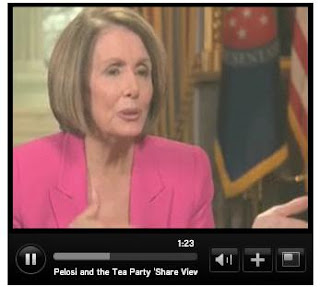