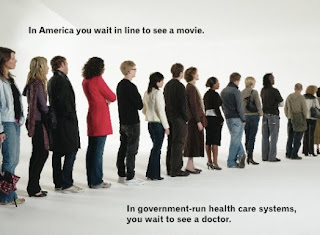 Twelve hundred people have lost their lives at an 'elite' British hospital due to an obsession with government targets.

Up to 1,200 people lost their lives needlessly because Mid-Staffordshire NHS Trust put government targets and cost-cutting ahead of patient care.

But none of the doctors, nurses and managers who failed them has suffered any formal sanction.

Patients in this hospital were subjected to deplorable conditions.

The inquiry found that:

• Patients were left unwashed in their own filth for up to a month as nurses ignored their requests to use the toilet or change their sheets;

• Four members of one family. including a new-born baby girl...

Conditions at this government run health care hospital were so bad, families were forced to wash their own soiled sheets.

The Francis report said staff numbers were allowed to fall 'dangerously low', causing nurses to neglect the most basic care. It said: 'Requests for assistance to use a bedpan or to get to and from the toilet were not responded to.

'Some families were left to take soiled sheets home to wash or to change beds when this should have been undertaken by the hospital and its staff.' Food and drink were left out of reach, forcing patients to drink water from flower vases.

Why anyone would want to mimic this system in any way is beyond comprehension. Progressives like to point to government run health care in Canada and Europe as examples, but the America has the best health care in the world. When Canadian Premier Danny Williams' heart was on the line, he chose to forgo Canada's socialist health care system and pay out of pocket to come to the US for heart surgery. Here is Williams response to the criticism:

"This was my heart, my choice and my health. I did not sign away my right to get the best possible health care for myself when I entered politics."

Liberals decry the US health care system as horrible, but that is a lie.
Posted by Bluegrass Pundit at 5:36:00 AM

Do you at least acknowledge that our health care system, in its current form, is unaffordable? Do you at least recognize the need for a massive overhaul? Not along the lines of state-provided health care, but at least something patient-centric like proposed in this article.
http://www.theatlantic.com/doc/200909/health-care
Being the party of no on a specific piece of legislation is only the beginning. We conservatives have to provide a clear alternative that is not the status quo, because most Americans realize the current system is unaffordable.