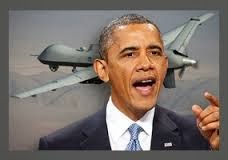 According to the new book “Double Down,” in which journalists Mark Halperin and John Heilemann chronicle the 2012 presidential election, President Barack Obama told his aides that he’s “really good at killing people” while discussing drone strikes.
Peter Hamby of The Washington Post reported the moment in his review of the book.
The claim by the commander-in-chief is as indisputable as it is grim.
Obama oversaw the 2009 surge in Afghanistan, 145 Predator drone strikes in NATO’s 2011 Libya operations, the May 2011 raid that killed Osama bin Laden, and drone strikes that killed the Pakistani Taliban leader and a senior member of the Somali-based militant group al-Shabab this week.
His administration also expanded the drone war: There have been 326 drone strikes in Pakistan, 93 in Yemen, and several in Somalia, compared to a total of 52 under George Bush.