PPP asks who leads Republican Party: 21% picked Cruz to 17% for Chris Christie, and 15% for John Boehner... 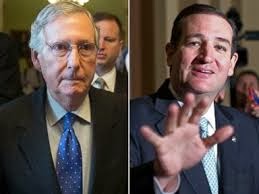 Mitch McConnell was hardest hit. He only got 4%. Collaborating with Democrats to fund Obamacare and raise the debt ceiling for nothing has ended any support McConnell had.


PPP's newest national survey finds that in the wake of the shutdown, Republican voters now view Ted Cruz as their party's leader. 21% picked Cruz to 17% for Chris Christie, and 15% for John Boehner. Cruz finished well ahead of the other GOP Senators we tested- Rand Paul got 9%, John McCain 7%, and Mitch McConnell only 4%. Mitt Romney at 8% and Sarah Palin at 4% were the other people we tested.
Numbers PPP will release next week show Ted Cruz would be an exceedingly weak Presidential candidate in the general election. The good news for the GOP is that even if the party base sees Cruz as their leader Democrats and independents actually see Chris Christie, who has far broader approval, as the leader of the Republican Party these days. With Democrats Christie gets 23% to 17% for Boehner and only 10% for Cruz. And with independents Christie gets 25% to 17% for Cruz and 10% for Boehner. Even if Republicans themselves see Cruz as their leader, they're better off with everyone else seeing it as Christie.