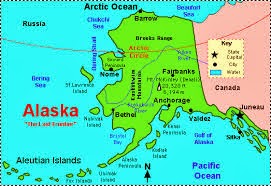 
Alaska is one of seven states which have a Democratic-held Senate seat up this year and which voted for Mitt Romney in 2012. Nate Silver of 538 and Chris Cillizza of the Washington Post's The Fix rate the seat, held by former Anchorage Mayor Mark Begich, as the least likely Republican turnover of the seven; 538 rates Begich's chances at 55 percent. Stuart Rothenberg rates it as toss-up/tilt Democrat, while Charlie Cook, slightly more bearish on Begich's chances, rates it as one of five pure toss-ups.

Email ThisBlogThis!Share to TwitterShare to FacebookShare to Pinterest
Labels: 2016, Alaska