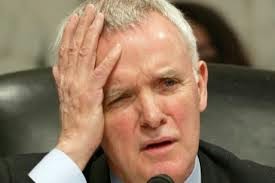 I'll bet former sen. Kerrey wouldn't admit that is he was still in office.

Via The Daily Mail


Former U.S. Senator Bob Kerrey thinks President Barack Obama, a fellow Democrat, was re-elected in 2012 because he ‘sucked less’ than former Massachusetts Gov. Mitt Romney.
The Nebraskan straight-talker told MailOnline in an exclusive interview that Obama isn’t up to the job of bringing liberals and conservatives to the table to rescue America’s slowly choking entitlement programs.
And Obama, he said Wednesday in his Manhattan office, knew full well he was lying when he promised that the Affordable Care Act would allow Americans to keep insurance plans they liked.
‘He had to know he was misleading the audience,’ Kerrey said quietly, recalling the newly minted president’s countless promises as Congress and the public debated his signature health insurance overhaul.
On the other hand, he may have said it so many times,’ he added, ‘that the spell-checker wasn’t in the room – the spell-checker, the fact-checker – somebody who says, “Excuse me, Mr. President, but I hope you know this…”‘
Obama’s infamous four-Pinocchio pledges, Kerrey explained, never stood a chance of being fulfilled because there were ‘a million people out there with policies that, for one reason or another, run short of the minimum standard. I mean, they bought something cheaper!’