MSNBC’s Joy Reid: “You’re More Likely To Be Beamed Up Into a UFO” Than Witness Voter Fraud… 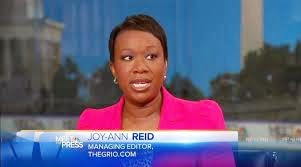 Joy Reid shouldn't worry about alien abduction. I am sure they would be wanting intelligent life...


MSNBC host Joy Reid dug into the topic of voter identification laws on Monday when she grilled a Republican guest about the stated necessity for instituting those laws: the need to reduce in-person voter impersonation fraud. Reid said that there have been a variety of studies conducted on the prevalence of in-person voter fraud, and asserted that a person is “literally” more likely to be abducted by aliens than to encounter that type of voter fraud.
“There have been a lot of studies on this,” Reid began. “There are a lot of studies that show, literally, you’re more likely to be beamed up into a UFO or struck by lightning than find in-person voter fraud.”
“Why is it your party seems fixated on trying to go after early voting?” the MSNBC host continued. “ Trying to go after, you know, forcing people to bring a birth certificate — all things that just happen to impact minorities and people who tend to vote for the Democratic Party?”
Keep on reading…