Is Obama trying to kill Putin by causing him to laugh himself to death? 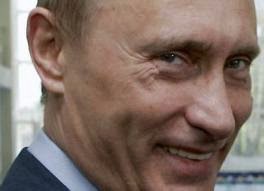 There just doesn't seem to be another rational explanation...


MOSCOW – Russia’s deputy prime minister laughed off President Obama’s sanction against him today  asking “Comrade @BarackObama” if “some prankster” came up with the list.
The Obama administration hit 11 Russian and Ukrainian officials with sanctions today as punishment for Russia’s support of Crimea’s referendum. Among them: aides to President Vladimir Putin, a top government official, senior lawmakers, Crimean officials, the ousted president of Ukraine, and a Ukrainian politician and businessman allegedly tied to violence against protesters in Kiev.
It remains to be seen whether the sanctions will dissuade Russia from annexing Crimea, but one an early clue that they will not be effective came just hours later when President Putin signed a decree recognizing Crimea as an independent state, perhaps an early step towards annexation.
U.S. official have warned of additional sanctions for Russian action, hoping it will deter Russia from any further aggression towards Ukraine, but it didn’t appear to upset the often outspoke Deputy Prime Minister Dmitry Rogozin.[...]
Another Russian on the sanctions list, Vladislav Surkov, also seemed unconcerned.
Surkov,  a top Putin ideologue often called the Kremlin’s grey cardinal, reportedly told a Russian newspaper, “It’s a big honor for me. I don’t have accounts abroad. The only things that interest me in the U.S. are Tupac Shakur, Allen Ginsberg, and Jackson Pollock. I don’t need a visa to access their work. I lose nothing.”