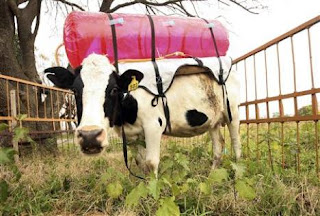 
As part of its plan to reduce U.S. greenhouse gas emissions, the Obama administration is targeting the dairy industry to reduce methane emissions in their operations.
This comes despite falling methane emission levels across the economy since 1990.
The White House has proposed cutting methane emissions from the dairy industry by 25 percent by 2020. Although U.S. agriculture only accounts for about 9 percent of the country’s greenhouse gas emissions, according to the Environmental Protection Agency, it makes up a sizeable portion of methane emissions — which is a very potent greenhouse gas.
“Cows emit a massive amount of methane through belching, with a lesser amount through flatulence,” according to How Stuff Works. “Statistics vary regarding how much methane the average dairy cow expels. Some experts say 100 liters to 200 liters a day… while others say it’s up to 500 liters… a day. In any case, that’s a lot of methane, an amount comparable to the pollution produced by a car in a day.”
“Of all domestic animal types, beef and dairy cattle were by far the largest emitters of [methane],” according to an EPA analysis charting greenhouse gas emissions in 2012. Cows and other animals produce methane through digestion, which ferments the food of animals.
Keep on reading…