While you weren't looking, Obama released 68,000 illegal immigrants with criminal convictions on their records 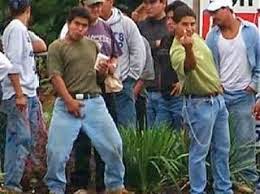 I wonder if he gave them Obamacare applications and voter registration cards already marked democrat.


Immigration agents tried to deport only about a fourth of the cases they encountered in 2013, said a report being released Monday from the Center for Immigration Studies that shows just how much President Obama’s policies have cut down on potential enforcement.
Jessica Vaughan, the report’s author, called it a form of “catch and release.” She said agents at U.S. Immigration and Customs Enforcement received more than 720,000 hits on immigrants who could be eligible for deportation but filed charges against fewer than 195,000 of them.
Of those let go, 68,000 had criminal convictions on their records. All told, more than 870,000 immigrants have been ordered removed from the U.S. but are defying the government and refusing to leave.

Joe Biden said they are already Americans... He's a heartbeat away from the Presidency