Does recent data show the recovery is running out of gas? 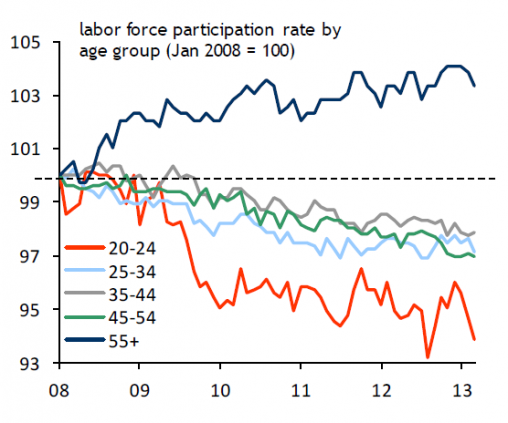 This would be catastrophic for democrats this fall.


The US economy has delivered two minor shocks in a week, prompting concerns that bond tapering by the Federal Reserve may be doing more damage than expected.
Non-Farm Payrolls data released on Friday shows that the workforce shed 806,000 jobs in April, a stunning drop that cannot plausibly be blamed on the weather. Wage growth and hours worked were both flat and the manufacturing hours per week fell.
This follows news earlier in the week that the economy to a halt in the first quarter. Growth plummeted to 0.1pc and is now well below the Fed’s “stall speed” indicator. Analysts blamed this on the freezing polar vortex over the winter.
Yet the jobs data confirm a disturbingly weak picture. The headline unemployment rate fell to 6.3pc but that was only because the labour “participation rate” plummeted back to a modern-era low of 62.8pc, last seen in 1978 when there were far fewer women in the workforce. The rate for males is the lowest ever recorded at 69.1pc.
The jobs market is highly volatile – and is often revised later – but the data are a warning that the US recovery may be losing momentum. Lakshman Achuthan, from the Economic Cycle Research Institute, said the trend was already weakening long before the cold weather. “We see a failure to launch. We’re decelerating, not accelerating, and that is a big concern,” he said.