Sen.Pat Roberts opponent asks Ks Secretary of State to kick Roberts off ballot for not living in Kansas... 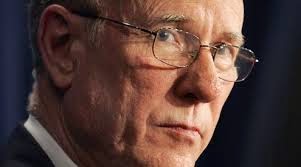 Well, it does appear Senator Pat Roberts’ Kansas residency is a sham.

As you know, Article 1, Section 3 of our U.S. Constitution states that;

“No person shall be a Senator who shall not have attained to the age of thirty years, and been
nine years a citizen of the United States and who shall not, when elected, be an inhabitant of
that state for which he shall be chosen.”

Senator Roberts is a permanent resident of Alexandria, Virginia, not Dodge City, Kansas as he will claim
on his ballot application later today.

When Senator Roberts files his paperwork later today, he will likely use the address 909 Club View Drive,
a single-family home in Dodge City where he claims to rent a bedroom. However, Senator Roberts
doesn’t stay at that address. When the owner was asked earlier this year how many times Senator
Roberts has stayed at that address since he allegedly began renting the room in October 2013, he
couldn’t remember.

Senator Roberts himself has declared with his personal financial disclosure that his home in Alexandria,
Virginia, is his primary residence. Fairfax county tax records show that he has owned that home since
1975. He lists that home as the forwarding address for mail and tax documents on the half duplex that
he owns in Dodge City. Senator Roberts has reimbursed himself and his wife from his campaign account
to the Alexandria address. And that is the only property of Senator Roberts’ not listed on his personal
financial disclosures, something that is only allowed for your primary residence. Read it all here.