There is not a smidgen of corruption in the upcoming Ukraine referendum... 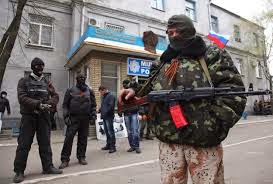 
Ukrainian military forces stopped and seized a vehicle carrying three armed men transporting guns, ammunition, and an estimated 100,000 ballots for a May 11 referendum already marked "yes" for the eastern city of Donetsk to break away and form an independent state, Kyiv Post reports.The men — which Ukrainian media have described as "armed terrorists" — were found with ballots in the trunk of their car on the outskirts of the city, a police source told the Ukraine Observer.Many cities in eastern Ukraine have been under siege for about a month, including Donetsk, where the city's main government building and a number of schools have been seized by pro-Russian separatists believed to be backed by Moscow.The new reports of fraudulent ballots brings to mind a similar incident in Crimea, the region recently annexed to Russia following a March 16 vote. A senior White House official told Reuters there was "concrete evidence" some of those ballots arrived to Crimean cities pre-marked.