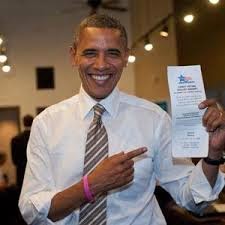 I struggle to comprehend black voters support of democrats. If you look at the black unemployment number, decline in family income and lower home ownership rates since Obama was elected, support for democrats looks foolish.

WASHINGTON — The confidential memo from a former pollster for President Obama contained a blunt warning for Democrats. Written this month with an eye toward Election Day, it predicted “crushing Democratic losses across the country” if the party did not do more to get black voters to the polls.
“African-American surge voters came out in force in 2008 and 2012, but they are not well positioned to do so again in 2014,” Cornell Belcher, the pollster, wrote in the memo, dated Oct. 1. “In fact, over half aren’t even sure when the midterm elections are taking place.”
Mr. Belcher’s assessment points to an urgent imperative for Democrats: To keep Republicans from taking control of the Senate, as many are predicting, they need black voters in at least four key states. Yet the one politician guaranteed to generate enthusiasm among African Americans is the same man many Democratic candidates want to avoid: Mr. Obama.