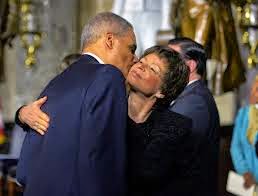 After Holder was busted for lying to Congress,  Valerie Jarrett and Holder started exchanging emails. When the truth is known, I expect Valerie Jarrett will be a key player in all the lawless escapades of the Obama administration.


Practically lost in the 1,000-plus pages of records is an index that shows Jarrett was brought in to manage the fact that Holder lied to Congress after the story about the disastrous gun-running operation broke in the media. The Bureau of Alcohol, Tobacco Firearms and Explosives (ATF) ran the once-secret program that allowed guns from the U.S. to be smuggled into Mexico so they could eventually be traced to drug cartels. Instead, federal law enforcement officers lost track of hundreds of weapons which have been used in an unknown number of crimes, including the murder of a U.S. Border Patrol agent in Arizona.
The files received by JW include three electronic mails between Holder and Jarrett and one from former U.S. Attorney Dennis Burke to Jarrett. The e-mails with Holder are all from October 4, 2011, a significant date because, on the evening of October 3rd, Sheryl Attkisson (then at CBS news) released documents showing that Holder had been sent a briefing paper on Operation Fast and Furious on June 5, 2010. The paper was from the director of the National Drug Intelligence Center, Michael Walther.
This directly contradicted Holder’s May 3, 2011 testimony to the House Oversight and Government Reform Committee, during which he stated that he, “probably heard about Fast and Furious for the first time over the last few weeks.”