You funded a study to teach mountain lions to walk on treadmills... 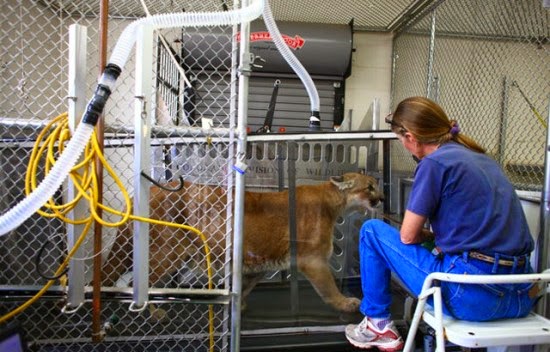 You also funded a study to see if hungry people were more likely to stick pins in a voodoo doll. They are.


Every year, Oklahoma Senator Tom Coburn and his staff compile an exhaustive volume of wasteful government spending from that year. The 2014 tome is chock full of government waste ranging from the redundant to the downright absurd.
Here is a list of my personal worst of the worst in federal waste:
Teaching Mountain Lions to Ride a Treadmill: $856,000
The National Science Foundation shelled out nearly a million taxpayer dollars to determine if captive mountain lions could be trained to ride a treadmill. The University of California-Santa Cruz researcher even boasted about receiving the grant saying, “People just didn’t believe you could get a mountain lion on a treadmill, and it took me three years to find a facility that was willing to try.” If anyone was wondering, it took the lions all of eight months to learn.
Studying how many times “hangry” people stab a voodoo doll: $331,000
After teaching mountain lions about treadmills, the National Science Foundation also funded a study to come up with the self evident conclusion that hungry people tend to be more angry and aggressive. They tested this theory by allowing spouses to poke pins into voodoo dolls as their “hanger” grew.
“Over the course of twenty-one consecutive evenings, 107 couples were given a chance to stick up to 51 pins into a voodoo doll representing their spouse. The pin-pushing happened in secret, away from the other partner. Participants then recorded the number of pins they poked into the dolls. Those tests revealed what may already be obvious to many couples: a spouse with low blood sugar was an angrier one, and stuck more pins in the doll.”
Keep on reading…