Whatever happened to that #Obamacare lawsuit Boehner claimed he was filing against Obama? 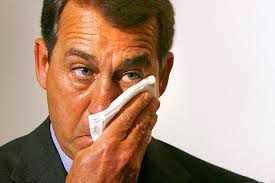 Apparently, Boehner is too busy campaigning, golfing and going to the tanning bed to take the 10 minute trip down the hill to the Federal Courthouse. The GOP needs new leaders. If Boehner and McConnell had spines, there wouldn't be any need for a lawsuit. Congress would have never funded Obamacare in the first place.


It takes about 10 minutes to walk from the Capitol to the federal courthouse just down the hill, but House Republicans haven’t managed to make that trip in the four months since they announced they’d be suing the president.
House Speaker John Boehner came out swinging hard last June when he announced that his chamber would take President Barack Obama to court. The suit, charging that the president grossly exceeded his constitutional authority by failing to implement portions of the Obamacare law, was billed as an election-season rallying point for aggrieved Republicans. But days before the midterms the House’s legal guns seem to have fallen silent.
Lawyers close to the process said they originally expected the legal challenge to be filed in September but now they don’t expect any action before the elections.

There are times I think GOP concocted a lawsuit just to shut us up.