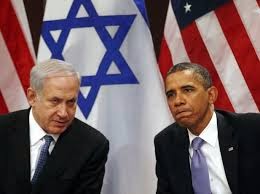 If Bibi is chickenshit, what does that make Obama?


The other day I was talking to a senior Obama administration official about the foreign leader who seems to frustrate the White House and the State Department the most. “The thing about Bibi is, he’s a chickenshit,” this official said, referring to the Israeli prime minister, Benjamin Netanyahu, by his nickname.
This comment is representative of the gloves-off manner in which American and Israeli officials now talk about each other behind closed doors, and is yet another sign that relations between the Obama and Netanyahu governments have moved toward a full-blown crisis. The relationship between these two administrations— dual guarantors of the putatively “unbreakable” bond between the U.S. and Israel—is now the worst it’s ever been, and it stands to get significantly worse after the November midterm elections. By next year, the Obama administration may actually withdraw diplomatic cover for Israel at the United Nations, but even before that, both sides are expecting a showdown over Iran, should an agreement be reached about the future of its nuclear program.
Keep reading…