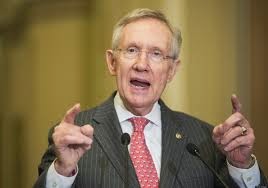 You can smell the fear...


Senate Majority Leader Harry Reid warned in a fundraising pitch Wednesday that Republicans could try to impeach and remove President Obama from office if the GOP wins control of the Senate in next week’s elections.
“Frankly, a Republican House and Senate could go beyond shutting down the government — they could waste months of our lives on impeachment,” Mr. Reid said in a fundraising email sent by the Progressive Change Campaign Committee, which is an outside group whose goal is to bolster liberal Democrats.
The email appeal asks for support for three Democrats in particular: Sen. Mark Begich in Alaska, Sen. Mark Udall in Colorado, and Rep. Bruce Braley, Democrats’ nominee in Iowa.
Keep on reading…