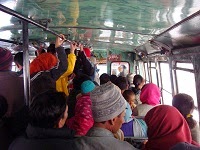 WTH?  It's time for Dr. Tom Frieden to resign. He is clueless.


Dr. Tom Frieden, director for the Center for Disease Control and Prevention (CDC), said during a telephone press briefing Wednesday that you cannot get Ebola by sitting next to someone on a bus, but that infected or exposed persons should not ride public transportation because they could transmit the disease to someone else.
Frieden’s statement came in response to CNSNews.com’s question regarding a video message from President Barack Obama last week addressing Ebola-stricken countries in West Africa, in which the president told residents they “cannot get [Ebola] through casual contact like sitting next to someone on a bus.” [...]
“My first question is, did the Center for Disease Control vet this video message before it was released and posted on U.S. embassy websites, and is it true that a person runs absolutely no risk of contracting Ebola on public transportation, such as a bus?”
“Yes, CDC vetted the message, and, yes, we believe it’s accurate,” Frieden responded.
“I think there are two different parts of that equation,” he continued. “The first is, if you’re a member of the traveling public and are healthy, should you be worried you might have gotten it by sitting next to someone? And the answer is no.”
“Second, if you are sick and you may have Ebola, should you get on a bus? And the answer to that is also no. You might become ill, you might have a problem that exposes someone around you,” he said.
Keep on reading….