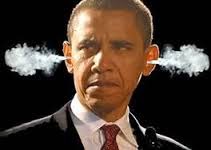 If Obama really wanted to make things better, he would fire himself. The buck stops at his desk.

The President put things more bluntly in the meeting, telling his aides, 'It's not tight,' while discussing their response efforts.
He then placed a majority of the blame over the botched handling of the crisis on the Center for Disease Control and Prevention, who he felt did not adequately train doctors and nurses at hospital as to proper protective procedures when dealing with a patient who has the disease and who he feels has been providing shifting information about the threat categories certain individuals who may have the disease are in.
In an attempt to coordinate the efforts of his administration, it was confirmed on Friday that Obama had appointed Vice President Joe Biden's former Chief of Staff Ron Klain to serve as Ebola czar.