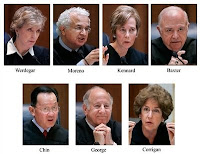 The ultra liberal California Supreme Court is desperate to uphold the marriages of 18,000 same-sex marriages conducted before Proposition 8 passed. They want to overturn this new amendment, but are having a difficult time finding justification. At least two of the justices seem to be considering banning state sanctioned marriage all together and only having civil unions or domestic partnerships for all. The intent of the voters was clear when they passed Proposition 8 defining marriage as only between a man and a woman. These lunatic left wing justices should "butt out."

Prop. 8 Ruling May Lead To Civil Unions For All

The California Supreme Court could decide that there are two kinds of same-sex couples: those who can't get married, and those who already did.

A ruling that upholds both voters' November decision to ban gay marriage and the 18,000 same-sex marriages conducted earlier in California could come off as a safe compromise. But it also promises to keep alive an issue that has split the state as few others have.

Such a decision would give same-sex marriage advocates an avenue to pursue a federal appeal, and an argument for compelling the state to, as Associate Justice Ming Chin put it, "get out of the marriage business."

During Thursday's oral arguments on a trio of lawsuits seeking to overturn the ban, Chin and Chief Justice Ronald George seemed to anticipate the difficulty in reconciling the state constitution's promise of equality with its commitment to giving voters wide discretion to pass laws.

Chin, who was not part of the court majority that ruled last year to legalize same-sex marriage, twice asked whether the court should direct the state "to employ non-marriage terminology" and instead make only civil unions or domestic partnerships available to all.(excerpt) read more at cbs13.com

That would be great. I've been pushing for this for a long time.

The government has no place overseeing or arguing about a silly religious ceremony.

Give marriage back to the churches and let priests decide who can marry.

Turn the legal contract over to the states and allow it between any group of consenting adults.

We have bigger problems then whether people that share the same genetalia marry. It's nobody else business anyway. You guys get all worked up over the word "marraige." Relax.