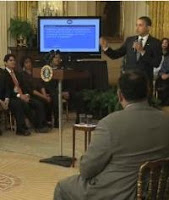 Five of the six people allowed to ask Barack Obama a question at his first 'online' town hall were identified as campaign supporters. The affiliation of the sixth person is not known. This contrasts to what White House Press Secretary Robert Gibbs told the Post that Obama has said, "I think it's important to engage your critics ... because not only will you occasionally change their mind but, more importantly, sometimes they will change your mind." Obama is not going to engage his critics unless he knows the question in advance and has a prepared answer on his teleprompter. Even then, he will not answer some questions.

In an event billed as an opportunity for the American people to ask questions of an "open" and "transparent" administration, the only fully identified inquirers plucked from the audience, it turns out, were Obama campaign supporters.

But according to a Washington Post report, those audience members the president chose included "a member of the pro-Obama Service Employees International Union, a member of the Democratic National Committee who campaigned for Obama among Hispanics during the primary; a former Democratic candidate for Virginia state delegate who endorsed Obama last fall in an op-ed in the Fredericksburg Free Lance-Star; and a Virginia businessman who was a donor to Obama's campaign in 2008." (excerpt) read more at worldnetdaily.com

It sounds to me like they were just people who supported the president, rather than the kind of canned 'town hall' questions Bush used to take. Were they voted on, or did he choose them?

Did you ask any questions? I didn't. I feel like I know his public stance on anything I can think of.