Japan to N. Korea-Don't launch or we will blast you 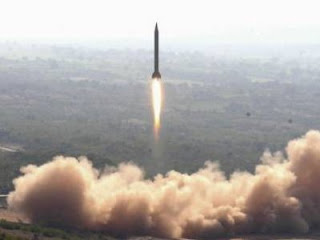 Japan threaten today to shoot down the expected North Korean missile launch. The North Koreans claim this launch is a satellite. Japan and the US are not so sure. The expected launch zone is very close to Japanese territorial waters. The Japanese are threatening to shoot down any missile on that trajectory. I wish them success.

Japan warns it may shoot down North Korean satellite launcher

Japan today threatened to shoot down a satellite that North Korea plans to launch early next month if it shows any signs of striking its territory.

Tokyo's warning that it would deploy its multibillion-dollar missile defence system raised tensions in the region after North Korea said that it had identified a potential "danger area" near Japanese territory along the rocket's flight path.

The regime told the International Maritime Organisation that the missile would be launched during daylight between 4 and 8 April, and that its boosters would fall into the Sea of Japan – about 75 miles (120km) from Japan's north-west coast – and the Pacific Ocean.

Officials in Tokyo said they reserved the right to destroy any threatening object in mid-flight, despite North Korean warnings that it would consider such a move an act of war.(excerpt) read more at guardian.co.uk