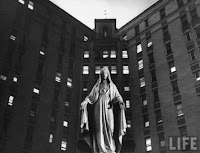 Catholic Bishops warned in November that Catholic Hospitals might shut down if the Freedom of Choice Act passes. Under this legislation, they would not be able to refuse to perform abortions. This legislation failed to get out of subcommittee last time it was introduced. Now it's sponsor is ready to refile it. The former Senate co-sponsor was Barack Obama.

A proposed bill promising major changes in the U.S. abortion landscape has Roman Catholic bishops threatening to close Catholic hospitals if the Democratic Congress and White House make it law.

The Freedom of Choice Act failed to get out of subcommittee in 2004, but its sponsor is poised to refile it now that former Senate co-sponsor Barack Obama occupies the Oval Office.

A spokesman for Rep. Jerrold Nadler, D-N.Y., said the legislation "is among the congressman's priorities. We expect to reintroduce it sooner rather than later."

FOCA, as the bill is known, would make federal law out of the abortion protections established in 1973 by the U.S. Supreme Court's Roe vs. Wade ruling.


The legislation has some Roman Catholic bishops threatening to shutter the country's 624 Catholic hospitals — including 11 in the Archdiocese of St. Louis — rather than comply.(excerpt) read more at stltoday.com

I think if these hospitals are the recipient of federal funds, this is appropriate. If they are fully private institutions, then they should be able to refuse service to anyone who doesn't have a life threatening condition.

Most of these abortion issues are about hypotheticals that happen only a few times a year in this country, like live birth abortion or a mother about to die if the baby isn't aborted. I can understand them being issues, but they are hardly our most central problems of the day.

@Steel Phoenix: I beg to differ. How our country, how our government view life IS a central problem. "Life, Liberty, and the Pursuit of Happiness" -- unalienable rights from our Declaration of Independence. Life being listed as the first right.

With FOCA the Dems will force doctors to perform abortions, even though doctors have an oath to preserve life.

Nominee Obama, being a co-sponsor of the bill when he was a senator, couldn't even answer Pastor Warren's question about life, yet he and his Democrats want to force this onto others?

The recession and jobless rates may be on people's minds right now, but if we are a nation with little regard to acknowledge the right to life of helpless, unborn children, then is America even worthy at all?