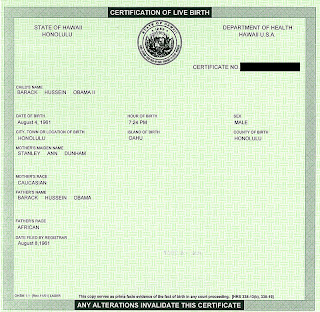 In response to the ongoing controversy over President Obama's "natural born" status, a Republican Congressman has introduced a bill to require candidates to produce their birth certificate. In spite of how you feel on the issue of Obama's status, this seems to be a reasonable requirement. Most of us had to produce a birth certificate to get a job or a drivers license. There is no such requirement for the Office of the Presidency. President Obama has produced a shorter Certification of Live Birth from Hawaii, but has refused for some reason to produce the longer Certificate of Live Birth that has the Hospital's and delivering Doctor's name. That style is the only type you can get in my state. Hawaii is one of only four states that consider birth certificates to be a private record. They will not release Obama's unless he asks and he isn't asking. Over three hundred thousand people have signed an online petition calling on Obama to release the longer "vault" copy birth certificate. Several lawsuits are ongoing, but the Supreme Court has so far refused to intervene. Since Democrats want Obama to run in 2012, it would be a safe bet they will not let this bill out of committee.

WASHINGTON (CNN) — Rep. Bill Posey, R-Florida, introduced legislation this week requiring candidates to produce a birth certificate to be eligible to run in future presidential elections, triggering a sharp reaction from Democrats who accused him of "questioning President Obama's citizenship."

Posey submitted a bill with no fanfare Thursday that instructs the Federal Election Campaign Act of 1971 to be amended to add the birth certificate requirement. The Constitution requires that a president or a vice president be "a natural born citizen." (excerpt) read more at politicalticker.blogs.cnn.com

I missed this today, thanks IR...

Hey, better late than never i always say, only this time there may be no republic left. 'specially now that Barry's been exposed by this weak handling of crisis so far...

he may just quit eventually and declare himself ineligible, to try and run for...well there's no place left to run from here but the hills.....

Sounds reasonable to me.

Problem with the document shown here, is that it is not a birth certificate.

Dr. Orly Taitz has finally gotten Chief Justice John Roberts to look over her briefs regarding the Obama-is-not-a-natural-born-citizen issue and I am not giving up hope just yet.

However, this newest legislation would be a good idea just to keep Arnold Schwarzenegger out of higher office. He is ruining California, of course with the help of a heavily lefty state congress.

The thing that galls me is that ANY OTHER CANDIDATE WOULD HAVE FALLEN OVER BACKWARDS TO COMPLY WITH THE DEMANDS FOR PROOF OF NATURAL-BORN-CITIZENSHIP. The very fact that Obama has refused tells me that he has no respect for our laws.

Even if we cannot get Obama out of office, it will be good to have the goods on him so that he is effectively barred from running for a second term.