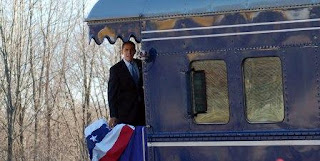 President-elect Obama took a train to his inauguration this January. He seems to be infatuated with rail travel. Vice-President Joe Biden also loves trains. He boasted he has taken over 7000 train rides to Washington. Now that They are in office, the US Government is committing $1.5 billion to improve Amtrak train service over the next two years. This comes to about a $26 taxpayer subsidy for every ticket to be sold during that time period. I guess they both had toy train sets when they were kids.

Obama boosts Amtrak funding
Northeast to get half of $1.3 billion grant

WASHINGTON - New England travelers should benefit from faster, more frequent and safer train travel with an extra $1.3 billion pumped into the long-struggling Amtrak, half of it directed to the Northeast Corridor between Boston and Washington, the Obama administration announced yesterday.