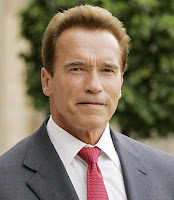 California voters were on Tuesday expected to reject the new tax initiatives proposed by "Governator" Arnold Schwarzenegger. The voters realizes raising taxes in an economic recession is a really bad idea. Financial Times is reporting:

California voters were on Tuesday expected to reject a series of special ballot measures aimed at addressing a widening state budget deficit in a blow to Governor Arnold Schwarzenegger.

California would be the world’s eighth largest economy if it was a separate country but the state has been rocked by the recession and a record budget deficit that has threatened the provision of essential public services.

Mr Schwarzenegger has been urging voters to support a series of new revenue-raising measures that would limit the need for deep cuts in education and emergency services and avoid the budget deficit blowing out to some $21bn.

But polls suggest that voters have not responded to his pleas and in the last few months his popularity has tumbled as he has become the target of anti-tax demonstrations and public vitriol from talk radio hosts.

John Kobylt and Ken Chiampou, a pair of popular radio presenters, have emerged as two of Mr Schwarzenegger’s most outspoken critics. They supported him when he swept to power following the recall of Grey Davis, the former governor, but turned against him when he tried to address the state’s dire economy.

“If you’ve seen the polls, people are really, really angry,” said Mr Chiampou at a recent Orange County rally, where life-sized effigies of Mr Schwarzenegger were ripped apart by an industrial shredder. “We’re in a recession. Who in the world would talk about raising taxes?”

I could not have said that better.