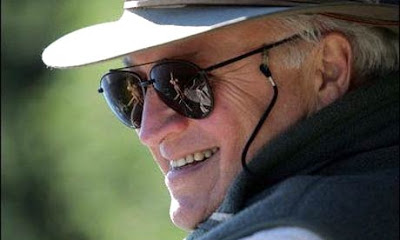 Former Vice President Dick Cheney's favorable poll ratings are on the rise. His numbers have improved by 8 points since January. During that time he has emerged as a defender of Bush White House policy and a vocal critic of some of Prescient Obama's positions. CNN reported:

WASHINGTON (CNN) -- As Dick Cheney prepares to give a major speech on the battle against terrorism, a new national poll suggests that favorable opinions of the former vice president are on the rise.

But the CNN/Opinion Research Corporation survey, released Thursday morning, indicates that a majority of Americans still have an unfavorable opinion of Cheney.

In the past two months, the former vice president has become a frequent critic of the new administration in numerous national media interviews.

I'm republican and I wish Dick Cheney would retire, why are we hearing more from him now that he is out of office than when he was in office??? I think he is a criminal and wish the media would stop even covering his spouting off and always negative remarks, this country has had enough of his ways... time to move forward, not cling to the past which did not work....

Here here, I agree, this guy is not out to help the American people, he always seems to have ulterior motives, like padding his own or his friend's pockets. I don't trust him and I voted for George W. If the republican party wants to reinvent itself, how is going back to the guy who had a hand in our present horrible situation going to help, they are backing the wrong horse.

Pee in my face and tell me it's rain Cheney.....you're in trouble and you know it and this is your clever way to get the public and the media back in their "brain dead" state.

It appears to me the Cheney is now going to run for another 8 years after being the puppet-master for the past 8. At one time - I too considered myself a republican but now I prefer to think of it as a recovering one...the party certainly doesn't stand for anything I do anymore.

Dick Cheney is a war crimimal - pure and simple. He's a self-serving pathological liar that should crawl back under a rock and shut his mouth. Maybe this moron's recent comments will cause the Obama administration into opening an investigation into his war crimes. At least we can hope...

As a retired U.S. Marine, I have no respect Cheney. In my opinion he is a liar and a coward. He is partially responsible for sending our young men and women to fight and die in a war (Iraq) that was initiated based on lies. While my brother and I were fighting in Vietnam, this spineless jellyfish was getting FIVE DEFERRMENTS.

If former Vice-president Cheney's favorable ratings went up, the poll must have been taken at the Bible Belt.
The more the man talks the deeper the hole he digs for himself and the Republican Party.
Too bad our Party doesn't have more people representing us like Colin Powell.

when is this old coot going to die?