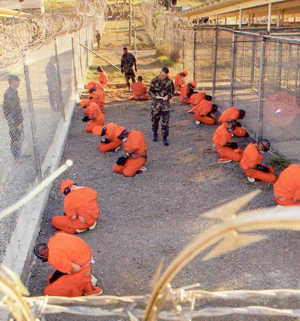 Senate Democrats are refusing to fund Obama's plan to release Guantanamo Bay terrorists in the US. I guess the folks back home don't want a terrorist moving in next door. IndyStar.com is reporting:

WASHINGTON (AP) -- President Barack Obama's allies in the Senate will not provide funds to close the Guantanamo Bay prison until the administration comes up with a satisfactory plan for transferring the detainees held there, top Democrats said Tuesday. And in a further break with Obama, the Senate's top Democrat said he opposes transferring any Guantanamo prisoners to the United States for their trials or to serve their sentences. Secretary of Defense Robert Gates has said 50 to 100 Guantanamo detainees may be transferred to U.S. facilities.

"I can't make it any more clear," Reid said. "We will never allow terrorists to be released in the United States."

Sen. Dick Durbin of Illinois said Obama's plan to close Guantanamo is not dead - only that the funding will have to wait until the administration devises an acceptable plan to handle the closure and transfer the detainees. Obama has promised to close the military prison by January.