Cheney is accused of making Gitmo harder to close 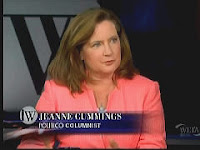 The Politico's Jeanne Cummings is complaining that former VP Dick Cheney is playing politics with Guantanamo and making it harder to close. Since Obama wants to bring some of the terrorists to America, most people should support Dick Cheney's elevation of this issue. It is very unfair to accuse him of playing politics. The funding to close Gitmo was defeated in the Senate by 90-6. Why was dissent patriotic in the Bush era and obstructionist during the Obama Presidency?

The Politico's Jeanne Cummings, a veteran of the Wall Street Journal, fretted on this weekend's Inside Washington that former Vice President Dick Cheney has “changed this debate in a way that has made it much, much harder to close Guantanamo, which the President is already committed to doing.” So he's done an awful thing in daring to oppose something President Obama is “committed to doing.” Dreadful!

In fact, she soon charged that in complicating Obama's intention to close Guantanamo -- which Obama had announced without any plan for where to place the detainees -- “Cheney really did damage to the effort to keep our country secure by turning this into a political issue. We were going to have to deal with this and to make it a political issue is not helpful. It's just not.”

To which a befuddled columnist Charles Krauthammer retorted by pointing out the overwhelming bi-partisan vote to block the closing: “Cheney is the one who turned it into a political issue? I thought it was a 90-6 vote in the Senate. Just about every Democrat in the Senate-” Cummings jumped in to blame Cheney for turning virtually every Senate Democrat against Obama: “No, Cheney started making political arguments a week ago. That is when you did start to see the tide turn up on Capitol Hill. It was after Cheney started to talk about 'I don't want to be the Member who says I brought a terrorist to a jail in my district.'”