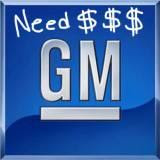 In order to save the UAW GM, the government will need to forgive $19.4 billion in loans and provide the "new" GM with tens of billions in additional support until the car market improves.
The Financial Times is reporting:

General Motors is preparing to file for bankruptcy protection as early as May 31, but a speedy restructuring of the car maker faces headwinds from an increasingly skeptical US Congress.

Under the current plan, the US government would cancel most or all of its existing debt in the company and invest in a “new” GM that could emerge from bankruptcy in the autumn, said a person close to the matter.

GM would receive tens of billions of dollars in new government money, probably in stages, to prop up its business at a time when car sales are threatening to be lower than the 10m annual rate at which GM says it can break even.

The person said that the government may keep a slice of debt in the “old” GM assets that are wound down in bankruptcy to retain leverage over the process.

GM, the largest US car maker, is likely to file for bankruptcy protection even if 100 per cent of bondholders agree to a debt swap proposed by the company and the government, said people close to the company. An agreement looked unlikely on Friday, after a bondholder committee said it would reject the offer.