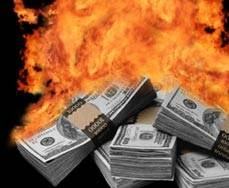 President Obama promised unprecedented transparency in how the hundreds of billions of our tax dollars would be spent. He gave VP Joe Biden an oversight role, which is a lot like putting a chimpanzee in charge of a space shuttle launch. Biden gave out the wrong web address for tracking stimulus spending. Ironically, the nongovernmental address address he gave out (recovery.org)is doing a better job than the actual Obama administration site (recovery.gov). The government site has only news releases and general breakdowns of the spending. The Washington Post reported:

Shortly after the economic stimulus bill was signed, Vice President Biden was talking up the administration's Web site to track the spending, Recovery.gov, when he accidentally directed people to Recovery.org.

As slip-ups go, this one had an upside: Unlike the government site, the privately run Recovery.org is actually providing detailed information about how the $787 billion in stimulus money is being spent.

To build support for the stimulus package, President Obama vowed unprecedented transparency, a big part of which, he said, would be allowing taxpayers to track money to the street level on Recovery.gov. Together with a spruced-up WhiteHouse.gov, the site would inject the stodgy federal bureaucracy with the same Webby accessibility and Facebook-generation flair that defined the Obama campaign.

But three months after the bill was signed, Recovery.gov offers little beyond news releases, general breakdowns of spending, and acronym-laden spreadsheets and timelines. And congressional Democrats, state officials and advocates of open government worry that the White House cannot come close to clearing the high bar it set.