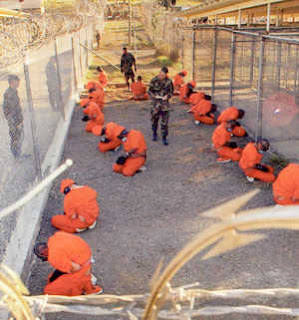 I seriously doubt Australia will be putting any shrimp on the barbie for these terrorists anytime soon. They have previously turned down a Bush administration request to take some of them. President Obama has come to the realization that bringing any of them here is political suicide, but he boxed himself into a corner by promising his left wing supporters he would close Guantanamo Bay by next January. Make some popcorn. This could get interesting. Reuters is reporting:

SYDNEY (Reuters) - The United States has made a new request for Australia to accept a group of detainees from Guantanamo Bay for resettlement, a government spokeswoman said on Saturday.

The request is the first by President Barack Obama's administration, which plans to close down the detention camp in Cuba within the next year.

Media reports have said the request involves a group of Uighurs from China's largely Muslim western province of Xinjiang. Beijing has reportedly been pressing Washington to return them to China, but U.S. officials have expressed concerns about their likely treatment there.

Earlier requests for resettlement in Australia late last year by former president George W. Bush's administration were turned down by Canberra in January on "national security and immigration" grounds.

A spokeswoman for Australian Foreign Minister Stephen Smith confirmed the new request had been received.

Sounds like another Obama Pipe Dream. He talked about this while running for POTUS and no one challenged him on where they would go. MSM sucks.
Jeff in Miami Beach