Iran has a new attack helicopter 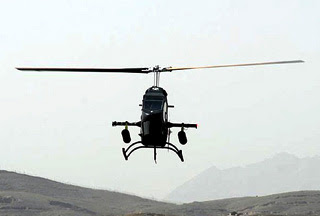 It appears to be a cheap Cobra knock off, but carries a formidable array of weapons and has all weather capability. The Israelis have real Cobras and Apaches.

The Shahed 285 was unveiled Sunday on the anniversary of the 1982 liberation of the Iranian city Khoramshahr -- which was occupied by Iraqi forces during the 1980-88 war.

The IRGC says the state-of-the-art helicopter is capable of taking part in seaborne and airborne combat operations. The Shahed 285 can carry autocanons, machine guns, guided missiles, anti-armor missiles and air-to-air and air-to-sea missiles.

The "100-percent domestic-made all-weather aircraft" has a slick aerodynamic design and is capable of taking off in harsh conditions.