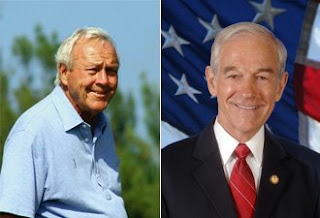 Rep. Ron Paul cast the solo vote against Arnold Palmer's Congressional Gold Medal. According to his spokeswoman, Rachel Mills, Paul has nothing against Arnie. He votes against all Congressional Gold Medal awards to civilians on the principle that it is unconstitutional to use taxpayer dollars in this way. I am not sure if Rep. Paul's stance is correct, but a Congressman with principles is refreshing. According to Yahoo Sports:

Seems that Paul votes against any and all Congressional Gold Medals, no matter who's up for the award. He voted against Rosa Parks, for heaven's sake. And he's actually got a reasonable explanation for doing so. According to his spokeswoman, Rachel Mills:

"It is certainly nothing personal against Mr. Palmer. In fact, Congressman Paul admires him greatly. Dr. Paul opposes using public monies for any and all of these gold medals given to private citizens, just on principle. Not to mention, it is unconstitutional to use taxpayer dollars in this way. He even suggested on the House Floor before he voted against Rosa Parks's medal that if it meant so much to the Members of Congress, why not fund the award out of their own pockets? He pulled $100 out of his own wallet, but had no other takers. At a time like this when all budgets are stretched so thin, it seems especially inappropriate to lavish gifts like this on private citizens, as much as he may admire the individual."

Wow. A congressman standing on principle like that, and not for some underhanded back-door political gain? That's actually fairly impressive -- and fairly depressing that the bar for congressional honesty is set so low that a simple "no" vote is an act of freakin' political courage.

But here's what he was voting against. The Congressional Gold Medal is one of the nation's highest honors, along with the Congressional Medal of Freedom. Originally intended for war heroes, it's been broadened to include a wide range of individuals who have performed a notable public service to the country. Recent recipients include Jackie Robinson, the Dalai Lama, Mother Teresa and Dr. Michael DeBakey, who perfected the heart transplant. You could quibble over whether a golfer deserves to be in such august company, but if Charles Schulz and Frank Sinatra could get it -- and they have -- then surely Arnie belongs as well.

So, bravo to both gentlemen -- Arnie for receiving the award, and Paul for not compromising his principles. Still, when Arnie is making his list of congressmen he'll be inviting to join him on the course, I've got a feeling we can go ahead and slot Rep. Paul at No. 423.

I may not agree with all that Mr. Paul stands for, but this I agree with him on.

I believe that his vote falls along the Libertarian Party Platform principals ...specifically the following. You may not agree with this but he is as was stated following the principals he is promoting.

All persons are entitled to keep the fruits of their labor. We call for the repeal of the income tax, the abolishment of the Internal Revenue Service and all federal programs and services not required under the U.S. Constitution. We oppose any legal requirements forcing employers to serve as tax collectors. Government should not incur debt, which burdens future generations without their consent. We support the passage of a "Balanced Budget Amendment" to the U.S. Constitution, provided that the budget is balanced exclusively by cutting expenditures, and not by raising taxes.

Mr. Paul is an intriguing man. Always has been and always will be. Although I have never voted for him in a Presidential primary, I am very proud to have him as my Congressman here in Texas. Go Ron, go. Keep stirring the pot.

"I believe that his vote falls along the Libertarian Party Platform principals ...specifically the following. You may not agree with this but he is as was stated following the principals he is promoting."

I am not sure I agree with him on this one, but I respect his stand on principle. Principles are sadly lacking in Washington these days.

Furthermore, it says the award is for "a wide range of individuals who have performed a notable public service to the country."

Even if we don't reject the idea of these rewards outright, how does an entertainer fit under that description anyway? Public service?