President Barack Obama is demanding that Israel not surprise the U.S. with an Israeli military operation against Iran. Haaretz is reporting:

U.S. President Barack Obama has sent a message to Prime Minister Benjamin Netanyahu demanding that Israel not surprise the U.S. with an Israeli military operation against Iran. The message was conveyed by a senior American official who met in Israel with Netanyahu, ministers and other senior officials. Earlier, Netanyahu's envoy visited Washington and met with National Security Adviser James Jones and with Secretary of State Hillary Clinton, and discussed the dialogue Obama has initiated with Tehran.

The message from the American envoy to the prime minister reveals U.S. concern that Israel could lose patience and act against Iran. It is important to the Americans that they not be caught off guard and find themselves facing facts on the ground at the last minute.

Obama did not wait for his White House meeting with Netanyahu, scheduled for next Monday, to deliver his message, but rather sent it ahead of time with his envoy.

It may be assumed that Obama is disturbed by the positions Netanyahu expressed before his election vis-a-vis Tehran - for example, Netanyahu's statement that "If elected I pledge that Iran will not attain nuclear arms, and that includes whatever is necessary for this statement to be carried out." After taking office, on Holocaust Memorial Day Netanyahu said: "We will not allow Holocaust-deniers to carry out another holocaust."

Located in the Iranian desert, the Natanz uranium-enrichment facility has been shrouded in secrecy. Many of the buildings there, visible in the aerial image from September 2002 on the far left, are now out of sight, buried underground, near left. The site is also protected by anti-aircraft guns and barbed wire. 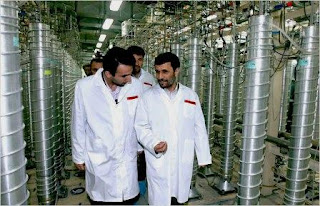 In cavernous underground halls roughly half the size of the Pentagon, Mr. Ahmadinejad walked past rows of Iran's first generation of machines, known as the P-1, which was based on a Pakistani design sold on the nuclear black market. The temperamental machines broke down frequently in the early days. One Iranian study traced the failures to centrifuge assembly when technicians, working with bare hands, inadvertently left behind clusters of microbes. That minuscule weight was enough to throw the whirling machines off balance and cause them to malfunction.
Posted by Bluegrass Pundit at 5:39:00 AM

Bro. you know the end is near when, the USA will no longer Back Israel. But then, in order for the war of Gog and Magog to occur all the countries must come against Israel, as it is told in the Bible Ez. 37,38 & 39.
This will mark the beginning of the Tribulation, if Christians aren't taken up to meet Jesus at the end of this war, then it will mean we are headed for a Mid Rapture.